Sure, it’s a cliche to say it’s an honor to just be nominated for something. So that makes me a cliche-monger, I guess, because it really is an honor for “The Race Underground” to be nominated for the very prestigious Kirkus Prize in non-fiction. I was thrilled to get a starred review from Kirkus when the book came out and so that review leads to the nomination (winners will be announced in October).

An almost flawlessly conducted tour back to a time when major American cities dreamed big.

Whatever happens from here is icing. “The Race Underground” is competing against remarkable works of non-fiction, including a biography of Douglas MacArthur, a collection of Nora Ephron’s writings, a book about the founding of Intel, Adam Rogers’ “Proof: The Science of Booze,” and “The Literary Churchill” by Jonathan Rose, to name only a few. Heady company, for sure. Like I said, it’s an honor to be included. 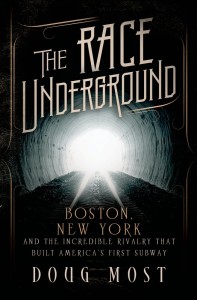