I have an event coming April 29 I am especially excited about.

In writing “The Race Underground” I built up my own mini-library at home, with approximately 50 to 60 books. Some I only cracked once or twice, others I opened a dozen times, and then there were those that were kept open constantly on my desk. By the time I was done writing, so many pages had been dog-eared, and the cover so tattered, it looked like the book had been through the washing machine.
That was my experience with “Gotham“, the Pulitzer Prize-winning tome by Mike Wallace and Edwin Burrows. It’s an amazing account of the city’s history up to the year 1898, so rich in detail and narrative storytelling it’s easy to forget just how long it is (oh, about 1,500 pages!). 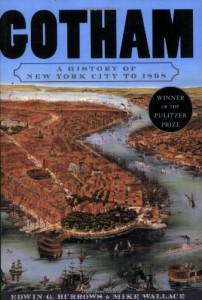 On April 29, from 6:30-8 p.m., I’ll be speaking and signing copies of ‘The Race Underground’ at the Gotham Center for New York City History, which was founded by Wallace back in 2000. From their website, here are the details:

In the 19th century, cities like Boston and New York grew congested with plodding, horse-drawn carts. When the great blizzard of 1888 crippled the entire northeast, a solution had to be found. Two brothers from one of the nation’s great families—Henry Melville Whitney of Boston and William Collins Whitney of New York—pursued the dream of digging America’s first subway, and the race was on. Doug Most chronicles the story, as exciting as any ripped from the pages of history. The Race Underground is a great American saga of two rival American cities, their rich, powerful, and sometimes corrupt interests, and an invention that changed the lives of millions.