A time capsule left behind in 1901 in Boston and just discovered inside a lion’s head statue has been opened, and among the contents inside were photographs of three Boston mayors, all of whom played significant roles in the birth of Boston’s subway, the first subway in America.

In particular, the photo of Nathan Matthews Jr., mayor from 1891-94, is telling. (The photo at left is not the photo inside the capsule) Matthews is considered “the father of the subway” in Boston, as I write about in great detail in “The Race Underground.” The other mayoral photos in the capsule were of Josiah Quincy, 1896-1899, who was in office on the day the subway opened and Edwin Curtis, who was mayor during the earliest days of construction in 1895.

Matthews was a big-thinking, populist mayor, who boldly pushed his city to punch above its weight. In his inaugural address, he said, “The city of Boston is no longer a New England town on a large scale: it is a great commercial and industrial city, the metropolis of New England, with a population greater than that of the whole state of New Hampshire.”

Matthews in particular feuded with a key character in the book, Henry Melville Whitney, the big businessman who first proposed a subway for Boston and became president of the West End Street Railway Company, but never aggressively followed through on building the tunnel that he proposed in 1887. In a speech he gave early in his tenure, Matthews chided Whitney: “Many schemes have been suggested during the past few years, none of which, it is safe to say, are entirely satisfactory. On the other hand, the demand for rapid transit is a genuine one, and should be met an early date.”

Ultimately it was met a decade after Whitney first proposed it, as this historic photo from Sept. 1, 1897, shows. 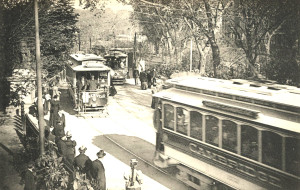