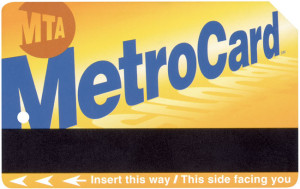 The wonderful New York Transit Museum, where I’ll be visiting this summer to talk about “The Race Underground,” is celebrating the 20th anniversary of the MetroCard. As the museum notes, the card is carried by more than 7 million people, not too shabby. The museum’s MetroCard event will be Wednesday, May 21. My own event will come this summer, on July 23. Save the date!

For the MetroCard event, the museum writes: What makes a design iconic? Can something functional also be a work of art and an emblem of great design? This year marks the 20th anniversary of a design creation over 7 million people carry around in their pockets every day: the MetroCard. In this special program, members from the original design team,  contemporary artists, and the MTA come together for one night to consider questions of the MetroCard’s aesthetics, function, inspiration and ownership.

But on October 27, 1904, the day the New York subway opened, there were no reusable cards or tokens. Instead you got a green IRT ticket, if you handed over five cents. In the first five hours after the subway opened, as I write in my final chapter, “111,881 passengers would pay to ride the subway, and it seemed like every last one of them was standing outside a station somewhere across the city.”

The scene was festive, with people donning their most festive clothes to celebrate the historic moment. As I write: “It looked like a riot, but felt like a carnival.”