Horses in big cities have a long, important history 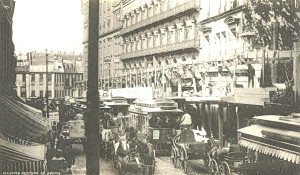 It’s hard to believe that the horse is still hanging around in big cities like Boston. After all, when the city’s trolley tracks were electrified around 1890, it all but ended the need for working horses in the city. But not only are horses still here and still working, they are at the center of a spat between City Councilor Stephen Murphy and Police Commissioner Bill Evans.

The debate is over the police department’s Mounted Police Unit and whether it’s a waste of money and serves only to make kids smile when they see the magnificent animals walking the streets during a parade, or whether they are actually valuable for community policing. When Evans failed to show up at a council meeting on June 24 to explain the need for the police horse unit, Murphy felt miffed and ordered an aide to find Evans and demand him to come to the meeting. Right now!

This passage from Meghan Irons’ story sums up what happened next:

More than 35 minutes after the start of the hearing, Murphy tapped his gavel twice to signal the end of the recess, and an angry-looking Evans arrived, saying he had spent the morning huddled with his commanders preparing to launch a major city anti-violence effort. And now he was in City Hall. “I’m trying to prevent kids from getting shot on the streets,’’ Evans said, composing himself. “That was where my priorities were.

In an age when cops on bicycles zoom around the city, it’s sort of hard to see how a horse is more practical and nimble than a bike, if the need arose for a quick chase. There were multiple reasons for why horses had to be replaced as a mode of transportation in cities in the late 19th century.

They were filthy and their manure smelled to the heavens, especially in the summer. As I write in “The Race Underground,” In 1860 New York’s “Second Avenue Street Railway could collect as much $4.60 per horse for its manure annually. By 1885, that figure had dropped to $1.10, and some stable owners were losing money on manure because it cost them so much to cart away.”

Also, keeping stables for horses in cities proved dangerous. A stable fire in New York City on May 27, 1887, leveled blocks of midtown Manhattan and killed more than 1,000 horses, along with 156 streetcars and four snowplows. Again, from the book: “The sounds from inside, of horses neighing and crying and bucking against their stalls, was agonizing for those on the streets.”

And they were expensive to maintain and a strong horse only lasted 2-3 years pulling heavy streetcars. Once Henry Whitney’s West End Street Railway company electrified its system in Boston, the horse quickly became irrelevant. In 887, his company had 8,000 horses. Five years later it had 3,754.

The horse did not entirely disappear, however, in Boston. On March 4, 1897, six months before Boston’s first subway would open, a devastating gas line explosion at the corner of Tremont and Boylston streets killed 10 people. It’s the subject of an entire chapter in “The Race Underground,” and this photo shows that people were not the only victims.