Short post. I read today that Leonardo DiCaprio was cast in the lead role for the Martin Scorsese-directed “The Devil in the White City,” the movie being made off of Erik Larson’s tremendous tale of the 1893 Chicago World’s Fair.

When I wrote “The Race Underground,” Larson’s book was one that I re-read, because I enjoyed his structure so much, alternating chapters between two characters. My book unfolded in a similar, but not identical manner, with alternating sections between Boston and New York.

But the other similarity, as many readers have since pointed out to me, was the cover. When I first saw the design of my cover, I immediately pulled out a copy of Devil, a cover that I loved. Even if my book didn’t achieve a fraction of the success that Larson’s did, at least I can pretend it had some comparable qualities. Right? And hey, in case Leonardo is listening . . . 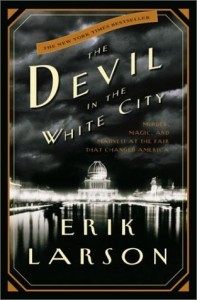 One Reply to “Tale of Two Book Covers: Race Underground vs. Devil in The White City”