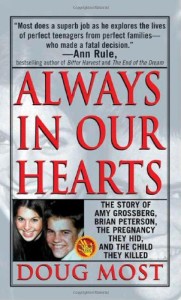 I recently received a check in the mail (a very small check, it should be noted), followed by a note on Twitter that have stirred me to post something about an earlier chapter in my life.

Fifteen years before I wrote about trains and subways and tunnels and Boston and New York in The Race Underground, I wrote another book about a very different subject, but one that is still sadly just as relevant today as it was back in 2000. That book was called “Always In Our Hearts.” And it was a horrifically sad story about two teenagers from comfortable surroundings in Northern New Jersey, who came from good homes, and who did an incredibly stupid and criminal thing because they didn’t think they could talk to their parents about their problem. Then I saw this story in today’s Globe, about adolescents today having low self-esteem and how parents should handle it, and the story really came flooding back to me.

Amazingly, as I just learned, that book still sells a few copies, which explains the royalty check I got from St. Martin’s Press, enough for me to take Mimi out for dinner and perhaps one glass of wine! And then a day later, I had this conversation on Twitter:

@GlobeDougMost I just read your book, “Always in Our Hearts.”I remembered when it happened in NJ. I could not put it down. Tears in my eyes. @ClaudiaDeHaan1

@ClaudiaDeHaan1 Thanks Claudia, I still love hearing from readers on that story all these years later, an important subject.

“Always In Our Hearts” was the story of Amy Grossberg and Brian Peterson, a couple of teenagers who dated in high school like we all did. Then they went off to separate colleges, like we all did. But they had a secret. Amy was pregnant. And she was terrified about how her parents would react, because in her mind, as I wrote and reported, her parents saw her as the perfect child who could do no wrong, and who certainly was not having sex. The details are not important now, but what happened next is: Amy and Brian kept their secret, from friends, from family, from everyone, and the ending was tragic.

This was a time before I was married, before I had kids. But there were a lot of lessons I learned in writing that book that remain strong with me today, now that I have two kids, and as I read that Globe article today.

The most important one was this: Make sure that your kids know it’s OK to fail. They are going to fail. They are going to screw up. We did. They will. But the most important thing for them to know is that when they do screw up, they have to tell you. Because you won’t push them away. You’ll embrace them even stronger. Amy Grossberg’s first reaction was to not tell her parents. And she has to live with that decision for the rest of her life.