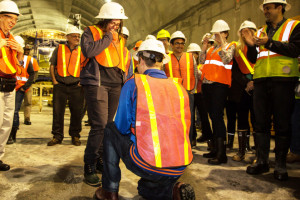 You may not think of a subway as being a romantic spot. What do you know! Maybe you would if you spent every day building one, alongside your girlfriend.

Adam Meagher, a city planner from Brooklyn, had been dating his girlfriend, Carolyn Grossman, also an urban planner, and decided there was no better place to propose than on the construction site of the Second Avenue subway, where they both have been working. So he dropped to a knee, a hundred feet below the Upper East Side, and held out a ring. The MTA has a bunch of great photos here.

The New York Post was there, naturally, and said it went down like this (there is sweet video in that link and that photo above is by photographer Stefan Jeremiah):

“Just like the Second Avenue subway has taken a long time, I’ve also been waiting a long time,” he said. “Will you marry me?”

“Oh my God, 100 percent.” she replied, embracing him. Then he placed the vintage diamond platinum ring, circa 1920s, on her finger, as everyone cheered.

No argument from me. Naturally.