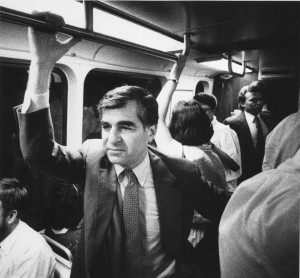 This is the top to a nice Globe story from January 2014:

He pleads guilty to being a “rail romantic” and was famous for riding the Green Line. Now, former governor Michael S. Dukakis could realize a rail buff’s dream: seeing his name atop Boston’s main train station.
The Massachusetts House voted Wednesday to rename South Station The Governor Michael S. Dukakis Transportation Center at South Station. The bill was quietly pushed by former governor William F. Weld, a Republican, as well as former Dukakis aides. But it came as a surprise to Dukakis.
“I’m honored and flattered,” he said, “but nobody told me about it.” Read the rest of the story here.

Seats are filling up fast, so sign up and come on out April 4, to the beautiful JFK Library/Museum and hear Dukakis and I talk about the past, present and future of urban transit. Click here for details.