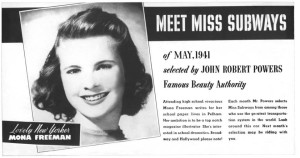 Yes, there used to be a pageant competition of sorts to crown Miss Subways of New York. The first Miss Subways, Mona Freeman, died recently at her California home, according to The New York Times.

This how the Margalit Fox in the Times described the annual crowning, which began in 1941:

For a generation of midcentury straphangers, Miss Subways, smiling down from placards in thousands of cars on the IRT, IND and BMT lines, was as deeply ingrained in the city’s workaday fabric as Schrafft’s, the automat and that heavenly coffee. Run by the New York Subways Advertising Company in conjunction with theJohn Robert Powers modeling agency, the contest was conceived to draw riders’ eyes to the surrounding advertisements.

Naturally, Wikipedia has a list of all the women who held the Miss Subways crown. That link is here.

As I write in “The Race Underground,” when men and women rode New York’s first subway in October 1904, it took only a few hours for the first man, F.B. Shipley of Philadelphia, to politely give up his seat to a woman. Of course, that happens all the time today. Right, fellas?